Every school has a history. Some schools have a longer history than others. Harding Middle School is no exception. As a matter of fact, Harding Middle School has an even longer history than most schools in Philadelphia. Construction on Harding Junior High began in 1923. Construction was completed in 1925 with the complete project costing just over $1,000,000. The nephew of President Warren G. Harding came to the opening ceremonies on May 8, 1925. Take a look at the newly completed Harding Junior High School. Other than the growth of some trees and the addition of cars, it has not changed much at all. 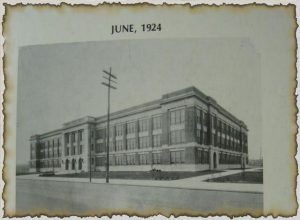 Warren G, Harding Junior High School was not just an ordinary school. It was designed to be a shining piece of architecture. The exterior, with its massive size and stone columns exuded a sense of strength to any passerby. The interior was just as impressive, especially given the historical period in which it was built. Visitors were greeted by the same marble walls and grand spiral staircases they are greeted by today. The school’s “theater”, as it was called at the time, had an impressive walnut stage and an upper tier balcony. The same impressive architecture is still in tact today.

What was life like for a Harding student in the 1920’s? Harding Junior High School originally housed 1,900 7th, 8th, and 9th grade students. Harding was originally built not only to provide liberal arts education and basic skills, but also to develop skills that could be useful once students entered the work force. Reading, math, social studies, wood shop, metal shop, sewing, cooking, drafting, choir, orchestra and athletics were all considered important studies in 1925 and for much of Harding’s history.